A lasting marriage does not always signal a happy marriage. Plenty of miserable couples have stayed together for children, religion or other practical reasons.

But for many couples, it’s just not enough to stay together. They want a relationship that is meaningful and satisfying. In short, they want a sustainable marriage.

“The things that make a marriage last have more to do with communication skills, mental health, social support, stress — those are the things that allow it to last or not,” says Arthur Aron, a psychology professor who directs the Interpersonal Relationships Laboratory at the State University of New York at Stony Brook. “But those things don’t necessarily make it meaningful or enjoyable or sustaining to the individual.”

The notion that the best marriages are those that bring satisfaction to the individual may seem counterintuitive. After all, isn’t marriage supposed to be about putting the relationship first?

Not anymore. For centuries, marriage was viewed as an economic and social institution, and the emotional and intellectual needs of the spouses were secondary to the survival of the marriage itself. But in modern relationships, people are looking for a partnership, and they want partners who make their lives more interesting.

Caryl Rusbult, a researcher at Vrije University in Amsterdam who died last January, called it the “Michelangelo effect,” referring to the manner in which close partners “sculpt” each other in ways that help each of them attain valued goals

Dr. Aron and Gary W. Lewandowski Jr., a professor at Monmouth University in New Jersey, have studied how individuals use a relationship to accumulate knowledge and experiences, a process called “self-expansion.” Research shows that the more self-expansion people experience from their partner, the more committed and satisfied they are in the relationship.

To measure this, Dr. Lewandowski developed a series of questions for couples: How much has being with your partner resulted in your learning new things? How much has knowing your partner made you a better person? (Take the full quiz measuring self-expansion.)

While the notion of self-expansion may sound inherently self-serving, it can lead to stronger, more sustainable relationships, Dr. Lewandowski says.

“If you’re seeking self-growth and obtain it from your partner, then that puts your partner in a pretty important position,” he explains. “And being able to help your partner’s self-expansion would be pretty pleasing to yourself.” 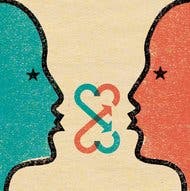 The concept explains why people are delighted when dates treat them to new experiences, like a weekend away. But self-expansion isn’t just about exotic experiences. Individuals experience personal growth through their partners in big and small ways. It happens when they introduce new friends, or casually talk about a new restaurant or a fascinating story in the news.

The effect of self-expansion is particularly pronounced when people first fall in love. In research at the University of California at Santa Cruz, 325 undergraduate students were given questionnaires five times over 10 weeks. They were asked, “Who are you today?” and given three minutes to describe themselves. They were also asked about recent experiences, including whether they had fallen in love.

After students reported falling in love, they used more varied words in their self-descriptions. The new relationships had literally broadened the way they looked at themselves.

“You go from being a stranger to including this person in the self, so you suddenly have all of these social roles and identities you didn’t have before,” explains Dr. Aron, who co-authored the research. “When people fall in love that happens rapidly, and it’s very exhilarating.”

Over time, the personal gains from lasting relationships are often subtle. Having a partner who is funny or creative adds something new to someone who isn’t. A partner who is an active community volunteer creates new social opportunities for a spouse who spends long hours at work.

Additional research suggests that spouses eventually adopt the traits of the other — and become slower to distinguish differences between them, or slower to remember which skills belong to which spouse.

In experiments by Dr. Aron, participants rated themselves and their partners on a variety of traits, like “ambitious” or “artistic.” A week later, the subjects returned to the lab and were shown the list of traits and asked to indicate which ones described them.

People responded the quickest to traits that were true of both them and their partner. When the trait described only one person, the answer came more slowly. The delay was measured in milliseconds, but nonetheless suggested that when individuals were particularly close to someone, their brains were slower to distinguish between their traits and those of their spouses.

“It’s easy to answer those questions if you’re both the same,” Dr. Lewandowski explains. “But if it’s just true of you and not of me, then I have to sort it out. It happens very quickly, but I have to ask myself, ‘Is that me or is that you?’ ”

It’s not that these couples lost themselves in the marriage; instead, they grew in it. Activities, traits and behaviors that had not been part of their identity before the relationship were now an essential part of how they experienced life.

All of this can be highly predictive for a couple’s long-term happiness. One scale designed by Dr. Aron and colleagues depicts seven pairs of circles. The first set is side by side. With each new set, the circles begin to overlap until they are nearly on top of one another. Couples choose the set of circles that best represents their relationship. In a 2009 report in the journal Psychological Science, people bored in their marriages were more likely to choose the more separate circles. Partners involved in novel and interesting experiences together were more likely to pick one of the overlapping circles and less likely to report boredom. “People have a fundamental motivation to improve the self and add to who they are as a person,” Dr. Lewandowski says. “If your partner is helping you become a better person, you become happier and more satisfied in the relationship.”

Secrets of a Happy Relationship

You can’t change people, so don’t drive yourself crazy trying.